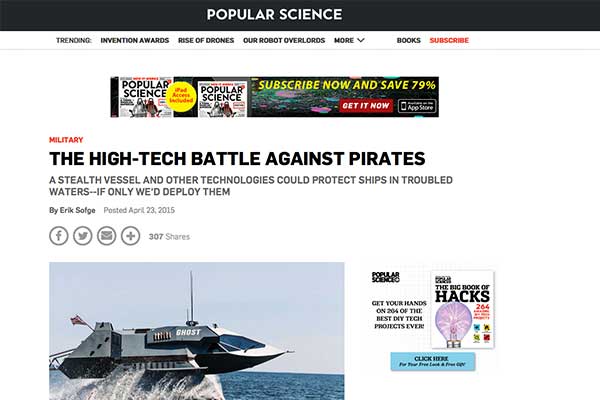 Popular Science’s April 23, 2015 article by Erik Sofge entitled, “The High-Tech Battle Against Pirates – A stealth vessel and other technologies could protect ships in troubled waters–if only we’d deploy them” sites Unifire’s Force 80 Anti-Pirate Water Cannon for close range protection of ships against pirate attacks. CLICK HERE to read the article.

Discussing a range of high-tech methods of defending against pirates, the article discusses Unifire’s Force 80 as an option for close range protection, stating:

Desperate times call for desperate measures, such as trying to hit an incoming pirate vessel with high-pressure water from a fire hose or water cannon. Since targets are likely to fire back, the remote-controlled Force 80 water cannon, made by Unifire, can launch 1,321 gallons of water per minute at a range of 93 yards without exposing its operator to gunfire.

According to Unifire, its new generation of Force 80 robotic nozzles now can be controlled not only by standard and wireless joysticks, but even over any web browser or the Internet and can be easily networked with other systems.

More information about Unifire’s robotic nozzles can be found at RoboticNozzles.com.

This website uses cookies to improve your experience while you navigate through the website. Out of these, the cookies that are categorized as necessary are stored on your browser as they are essential for the working of basic functionalities of the website. We also use third-party cookies that help us analyze and understand how you use this website. These cookies will be stored in your browser only with your consent. You also have the option to opt-out of these cookies. But opting out of some of these cookies may affect your browsing experience.
Necessary Always Enabled
Necessary cookies are absolutely essential for the website to function properly. This category only includes cookies that ensures basic functionalities and security features of the website. These cookies do not store any personal information.
Non-necessary
Any cookies that may not be particularly necessary for the website to function and is used specifically to collect user personal data via analytics, ads, other embedded contents are termed as non-necessary cookies. It is mandatory to procure user consent prior to running these cookies on your website.
SAVE & ACCEPT